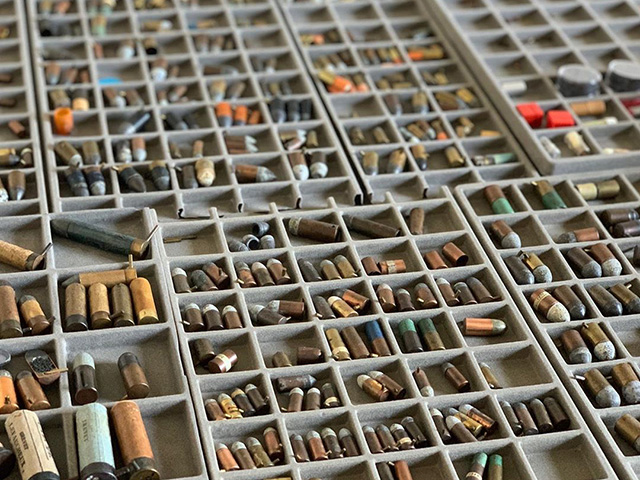 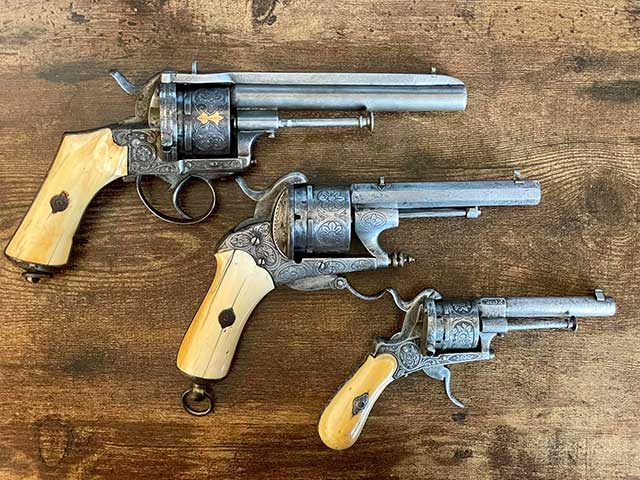 Pinfire Guns from Around the World 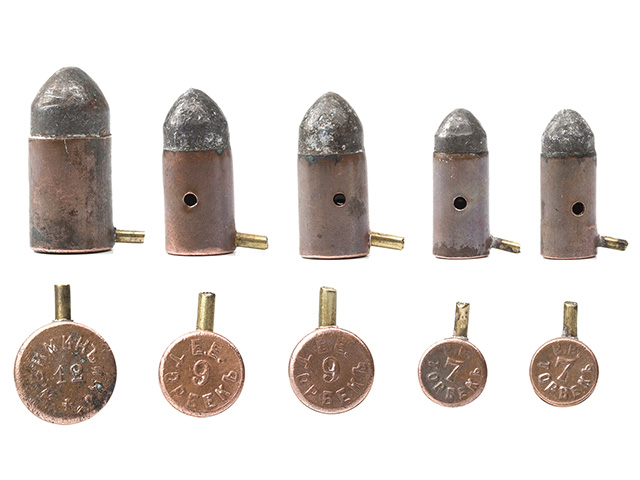 From Paris to Buenos Aires: The Hardware Trading Company of François and Jean Dellazoppa

Dellazoppa Frères was a hardware trading company that was founded in Paris, France in 1871 by François and Jean Dellazoppa. The company operated in Paris, Buenos Aires, and Brussels during the late 19th and early 20th centuries, and produced a range of hardware and related products including metallic ammunition such as pinfire cartridges.

The Gun Wad Bible: The Third Edition of Christopher Saur’s Hausbieble and its Role in the Revolutionary War

The Hausbieble, also known as the “House Bible,” was a collection of three German-language Bibles printed in America by the Saur family in the 1740s-1770s. As the first European-language Bibles to be printed in America, the Hausbieble was important in helping German immigrants preserve their cultural heritage in the New World. Additionally, it played a role in the American Revolutionary War, as British soldiers used its pages to make paper cartridges.

What is the pinfire system? And why was it invented?

What is the pinfire system?

The pinfire system was a type of cartridge and firing mechanism for firearms that was invented by a French gunsmith named Casimir Lefaucheux in the early 19th century. The main feature of the system was the use of a small pin that protruded from the side of the cartridge and was struck by the gun’s hammer to ignite the gunpowder and fire the bullet. This was a significant advancement over earlier firearms, which used loose gunpowder and a separate ignition device such as a flintlock or percussion cap.

Lefaucheux was a well-known gunsmith and inventor who was credited with several innovations in firearms technology, and the pinfire system was one of his most notable contributions. He patented the system in France in 1835, and it was subsequently adopted by gun manufacturers in other countries.

H. H. Schleber & Co of Rochester, New York was a manufacturer of thread-wound shot concentrators that would allow hunters to shoot ducks, geese, turkeys, foxes and other animals that were difficult to get close to, from further away.

There were many shot concentrator patents around the world and they all aimed to keep the loose shot, fired from a shotgun, together longer before it started spreading out. Modern guns and even some guns during this time period, use a method called choke-boring that tapers down the muzzle-end of the barrel to achieve similar results.

Schleber’s patented, thread-wound shot cartridges were designed to hold lead shot inside two tin half cylinders that were held together by thread that would unwind in flight after it was fired. After the thread completely unwound it would release the shot. They were wrapped with varying length of thread that corresponded to how many yards away the target was that you wanted to shoot. Some early reviews of the system noted that the hunter would need to be good at judging the distance needed in order to correctly choose the right cartridge; especially since at closer distances it would be a large solid projectile until it fully unwound.

Henri Barthe & The Lark Mirror; with a Taste of Ortolan Bunting

A lark mirror, known in French as le miroir à alouettes, was a tool to help hunters entice small songbirds to their location so they could be harvested.

In 1680, an early French dictionary referred to these mirrors for catching larks and ortolans. It defined them as:

A piece of wood carved into an arch where there are several notches which small mirrors are glued & which is supported by a peg in the middle of which there is a hole to put a string in order to make this mirror turn, that is driven into the ground between two sheets to catch ortolans & mainly larks.

These small songbirds were considered to be a delicacy and were cooked and eaten whole, in one large bite; head, bones and all. Ortolans were the most coveted and eating them has been represented in paintings and media over the centuries as a gluttonous, almost shameful act. Modern, French preparation of this delicacy would make the use of ortolans that were captured alive and blinded or kept in dark cages where they were force fed until they were twice their normal size. They were then drowned and roasted in Armagnac, a type of Brandy from the Armagnac region in southwest France.

A Treatise on the Robert Rifle by the Count of Langel

I recently picked up a Robert rifle and of course had to find as many books with original source documentation in them as I could. The first and most unique is from a small book with 143 pages written by the Count of Langel that focuses on various topics relevant to hunters in the 1830s.

I have not come across many advertising posters like this that mention pinfire cartridges so I jumped at the chance to buy this one when it came up for auction. This early color lithograph was printed between 1885 and 1889 and was likely provided to various gunmakers and ironmongers who sold Eley cartridges to the public.

It would have functioned as both an in-store advertisement as well as a quick reference guide to the various types of cartridges and accessories that Eley manufactured, as shown when turning it over.

Loading and Reloading Pinfire Shotshells; and an Original Patent Manuscript by Casimir Lefaucheux

Here is a patent manuscript by Casimir Lefaucheux. It is French patent number 8955 from 1850. It describes a reusable pinfire shotshell that has a base that unscrews to allow easy reloading. It also pictures a tool to extract the shell from the gun and unscrew it.

By 1850, pinfire shotshells had been on the market for 15 years and people were familiar with these new breech-loading guns. But they were still more expensive than buying a percussion cap and powder used by a muzzle-loading, percussion gun. Shotshells that were able to be reloaded was one solution to this issue. And many manufacturers made metallic shotshells that could be reloaded many times.

Here is a selection of pinfire cartridges that were loaded with a fireworks charge. These pinfire fireworks cartridges allowed anyone with a pinfire shotgun, pistol, rifle or cane gun to shoot fireworks into the air.

This is one of the very few American-made pinfire shotshells. It was patented on 8 February 1870 by William H. Smith of Charlestown, Massachusetts.

The main idea for his improvement was around the safety issues of loading a shotshell that was already primed. He designed the system to allow it to be loaded ahead of time and then primed later when one was ready to use it.

Born into a family of silversmiths and cartridge manufacturers, William Thomas Eley and Charles Eley took over their father’s business upon his death in 1841 and founded W. & C. Eley. They continued making percussion caps and their patented wire cartridges which the company had become well known for.

The story of Italian pinfire guns and cartridges begins in the Kingdom of Sardinia with an order of 5000 Lefaucheux model 1854 revolvers. This first order was placed in 1859 and delivered in 1861 and these guns were referred to as the Corto model. They were pretty similar to the typical Lefaucheux model 1854 revolver except they had a 21% shorter barrel around 123mm long. At the time that these revolvers were ordered and delivered it is thought that the arsenals had not yet started producing their own pinfire cartridges yet so cartridges were likely imported from France or elsewhere as well.

The Kingdom of Italy

Shortly after these revolvers were ordered, the Kingdom of Italy was formed and a new order was made for another 12,000 revolvers.

During the American Civil War, Rolla, Missouri was a heavily garrisoned town that played a strategic role protecting the terminus of the Southwest Branch of the Pacific Railroad. This section of the railroad branched off the main Pacific Railroad of Missouri 40 miles southwest of St. Louis in Pacific City. It began construction in 1855 and the first train pulled into Rolla on December 22, 1860.

I recently picked up this pair of pinfire pistols designed by Casimir Lefaucheux. I had never seen examples quite like them before and was really excited to get them in. Casimir Lefaucheux was making pistols from the time he took over the Pauly company in 1827 as shown in our recent post on the topic. But these early pistols were much larger and bulkier. In 1833, Lefaucheux was issued a new patent for his fusil à charnière, or hinged gun.

He advertised and promoted the fact that these pistols and rifles were easier to use and safer and better in every way than his earlier Pauly guns, and especially better than other percussion guns of the day. They could shoot 500 rounds without cleaning or even wiping down which was unheard of for typical percussion guns that loaded from the muzzle. Lefaucheux also emphasized that they were easier to take apart and maintain by the average person.

December 25, 2021 by Aaron Newcomer No Comments

This article will take a look at a horizontal pinfire cartridge that has been unknown for quite some time. For awhile after I acquired it I could not figure out much about its history. But after discussing it with Fede Graziano we were able to get a little better understanding of it. This is the 14.5×48/49R Horizontal Pinfire cartridge and it was manufactured for or by Johann Jacob Peter of Stuttgart, Germany.

Hello, my name is Aaron Newcomer. I am a collector and researcher of early 19th century breech-loading firearms systems, with a particular focus on the work of Jean Samuel Pauly and Casimir Lefaucheux. I collect cartridges and documents related to these types of firearms and conduct research on these topics, furthering my understanding and knowledge of these historical firearms and their place in the evolution of firearms technology. My collection and research reflect my dedication to preserving and understanding the history and technical innovations of these early firearms systems.

Read more about me and where my work has been published.

The Relationship Between the United States and Pinfire Cartridges

The Pinfire Page was a recurring column I had in each issue of the bimonthly publication, The International Ammunition Journal. This compilation book combines together the first 5 years of my column, showcasing my research, images and other documents related to the pinfire system which was the first major breakthrough in modern ammunition.